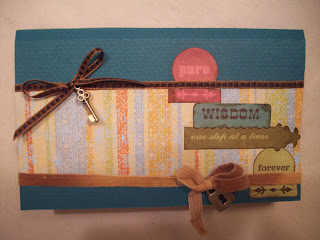 Here is what I am working on now. Actually, I have this one finished. I got the idea from my Mom, actually, when we discovered that we both were writing down our favorite scripture verses on 3x5 cards. The only difference was that I had embellished my cards with pretty stamps, and hers were on colored cards. She suggested that I make her some pretty ones for Christmas. What a great idea! I decided to make a set for each of my closest female relatives (the grown up ones especially).

Here are some more pics, and if you know my relatives, don't give out my surprise gift ideas to them! 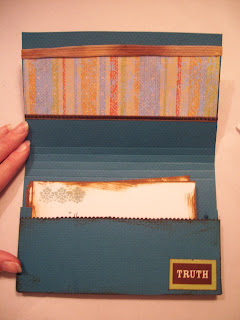 As you can see, I've made a folder out of cardstock. Although I don't show a picture, I'm really pleased with the pocket and how that came out. I cut one inch strips of cardstock, and scored it every quarter inch, alternating folds. This resulted in a good side for my pocket. I cut the strips into appropriate lengths for the sides and bottom of the pocket, mitering the ends so they would not hinder movement. Clear as mud, right? Suffice it to say, it works great! 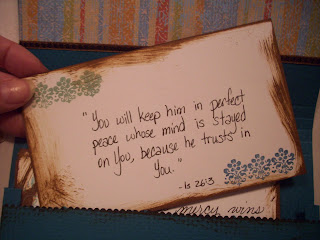 I started the packet out with three of my favorite verses that encourage me. I don't want the recipient to be afraid to write on these cards. 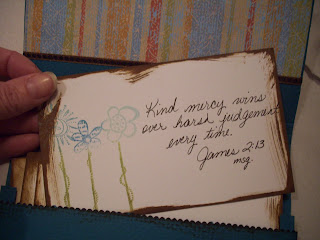 I tried to make the stamped images different, but color-coordinated. 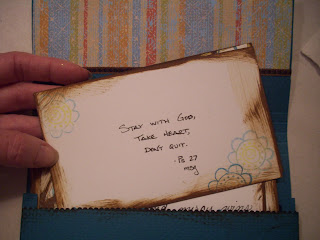 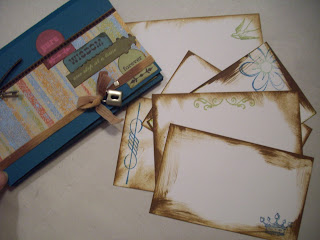 Here are some of the blank cards. I think there are over 20. 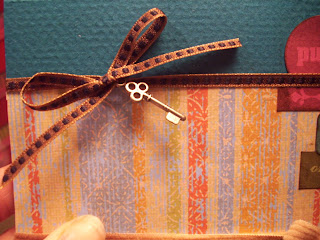 And a close-up of the key. My camera battery gave out at this point, so I don't have a close-up of the lock. I am using whatever supplies I have on hand, and I know I am amply supplied, and have no fear of not finding something to add to my gifts. My hubby has been so supportive of my habit, uh, art and creativity, allowing me to buy a fix, uh, I mean supplies for my creative endeavors. Seriously though, it's such a blessing to have supportive family. I am so enjoying creating gifts this year!
Posted by fancyscrapper at 2:17 PM

Posted by fancyscrapper at 1:12 PM

I am attempting to add Type Pad connections to this blogger blog of mine. I just followed a rather detailed series of instructions that required me to find specific HTML code and insert previously copied snippets and such. I can't believe I even just typed that sentence out! I DO know what HTML code looks like. I just have no idea what any of it means!

But one can grow, eh?

Have a scrappy day!
Posted by fancyscrapper at 1:12 PM 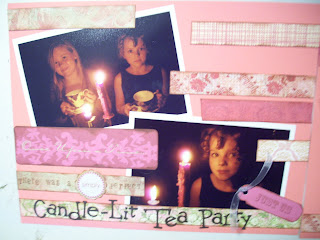 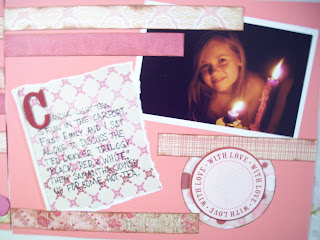 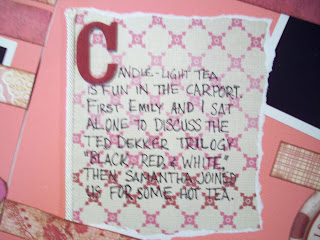 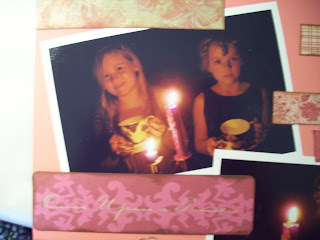 This was so fun. It's interesting since I set the pictures down and wrote a journal block, but then ran out of inspiration. That was, like, a year ago. Just last month I finished it out with the needed embelishments. I'm experimenting with a horizontal 8x12 album. I'm enjoying the change and the challenge.

I love that these pictures show Sam with her hair so tightly curled. She DOES love those rag curls. Recently she got her wish and her hair is now bobbed in an adorable style, so rag curlers will not be employed for quite some time to come. Again, the pictures that I took here of the layout are not the quality I'd like, but they are here anyway. Seriously, I started this blog some time ago, and have failed miserably to post much at all! I'm quite embarassed. I hope to post more regularly as I continue to figure out how to use Picasa to upload the pics. 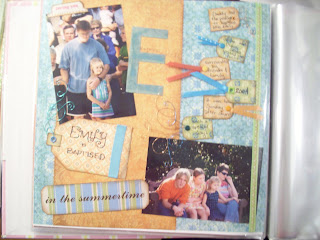 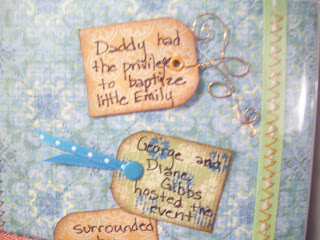 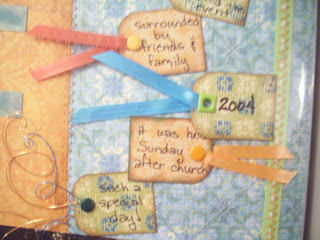 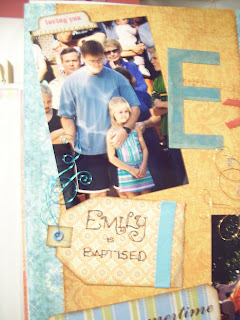 These pictures are woeful at best. None the less, they are offered here as proof that I HAVE been scrapping. I actually have quite a few more pages and projects done, but my sweet oldest daughter has my camera at camp, and will not return until tomorrow. These pictures I scrapped are of my sweet third-born several years ago when she was baptised. I love that my hubby baptised her among so many caring church family members. It was a lovely day, and now is captured on a lovely scrapbook page.

This page has some of my super faves: wire work (nice and curly), tabs, machine stitching, and tags with ribbons. Obviously, the base is the beautiful picture of Em with her Daddy captured candidly. Love that!

Posted by fancyscrapper at 6:42 PM No comments: 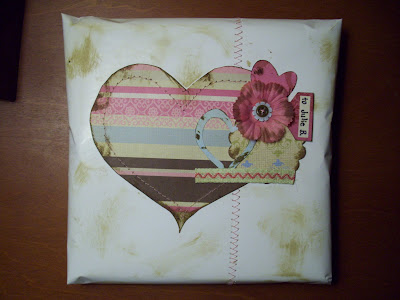 I finally finished my gift for my dear friend. We have been friends for half of our lives, and have shared so much. I made her a special gift for her 40th birthday. She made an AWESOME purse for me for my birthday, and I get compliments on it all the time. She said after she made it for me that she was tempted to keep it herself since it turned out so amazingly cute! Plus she had not done a zipper in a bag of this sort before (she made the pattern up!), so it was an adventure to figure that part out.

Anyway, now I'll have to post a pic of the purse for ya! I love it.


But I digress. This is supposed to be about the stuff I make and the stuff that inspires me. I've been working on her gift for over a month. I'm super slow, but it's alright, there is no wrong or right way to be creative. My friend who will recieve this gift is super speedy, and I admire that about her so much. We inspire each other. I think we need to get together just to create again. It's been way too long.


Sooooo, this gift was fun to make, and I'll post pics of it later. Right now I'm showing pics of the Package. I love creative packaging, don't you? This is the first time I actually put wrapping paper in my sewing machine though. My friend loves the zig zag stitch, so that's what I did on the outside of this package. Then I just went crazy with stuff on the outside, layering and sewing. I love it. It's a good representation of what will be found inside.

Then I decided to add a note to it. There was a pocket in the back of the package (it was inadvertantly made, btw), so I got to making a cute little missive to tuck in there.

I hope she likes it all!

Posted by fancyscrapper at 3:37 PM No comments:

I've been running around with my popular girls. I've not scrapped in a week. I started this blog to post stuff I make, but, well, I've not been able to get into my Happy Place to create!
I had a little time yesterday, but you can imagine that much has gone unattended due to the high level of activity around here, and I spent my time catching up on other things. I had neglected a pile of mail for a couple of months. Yeah, a couple of months. I'm talking bills 'n' such. It's okay though, since we are going through the ugly process of bankruptcy. I just didn't know what to do with those bills, so they have been piling up on our butler's pantry. I got to pass them multiple times daily, and be reminded. . .
This didn't seem healthy, and though the rest of the house needed tidying attention, I decided to tackle that pile. The thing about bookkeeping time is that though an hour or more is required, the effect isn't extremely obvious when you are done. I mean, if you spend time straightening a room, dusting, vacuuming, putting out different bits of decorations, things like that, your hour shows something when you are done. Not so with bookwork. I think that's why it's discouraging to me to take the time to work with such unpleasant and unfulfilling tasks as bookkeeping.
Still, the pile on that counter was QUITE a PILE! And so the effect was obvious once I was done. I took all the pertinent bankruptcy-related items (which was like, half the pile!), and added them to our stack of other paperwork on the same subject. Apparently, lots of people are filing, and our lawyer is somewhat swamped, so our original paperwork we filled out and gave to them is just waiting in line. It took us a month to fill out the original form, since it was around 100 pages. Good gravy! No one said filing bankruptcy is an easy out! Not by a long shot!
Anywhoo, there's a big weekend happening this weekend, and usually I tag Saturday as my scrappy day. In fact, one of the things I'm working on is a set of books for a group of girls who are gathering this weekend, and I had hoped to get them done through the week, but, alas, my time has been brief! The other book I'm working on should have been done before April 16th (this represents the birthdate of the recipient of the album). Still, it sits there, surrounded by all the goodies I intend to use, waiting, waiting. . .
Oh I've started these projects! They are all nearly done.
I just need some time and energy. Sometimes I have the time but not the creative energy. Other times I have ideas, and no time. Right now, I'm a little shy on both! And today promises to be no less crammed with activity than the earlier portion of the week. In fact, I must sign off and get with it right now.
Here's to hoping for a scrappy few hours at SOME point soon!
Posted by fancyscrapper at 7:55 AM No comments:

A Year of Creativity

This year is totally exciting. Yeah. We are filing for bankruptcy. My husband has started a new job. My daughter has her first-ever job. I turned 40 this year already (February). That's big, right? My children will all turn big ages this year, all evens. By the end of the year they will be 18, 16, 12, and 10.

So it's a big year! I plan to scrap it all in lots of ways. I've spent the afternoon today getting inspired by reading long-neglected scrappy blogs. Here's my most fave: My Inner Martha I totally love this girl's style! You gotta just scroll around there. It makes me think of the stuff Donna Downy has been doing with pictures and fabric. Elizabeth is more on the paper side (which I like), but she's incorporated so much fabric and lace into the process that is looks totally cool and super dimensional.

I'm all about photos, paper, punches, scissors, paint, stamps, staples, etc. My favorite time of year is the Fall when school supplies go on sale. I stock up on color crayons, notebooks, and glue every year. I just love all that stuff! I think it's one of the reasons I am a home schoolin' mom. All the supplies make me happy!

I'm off to create something unique and beautiful. Do yourself a favor, and make something lovely today!
Posted by fancyscrapper at 1:20 PM No comments: